A siting evaluation was conducted to select an appropriate location for the project in Prince George’s County, Maryland. The site selection considerations included:

A priority for site selection was to identify suitable property that had a permitted use within the current zoning designation. The proposed site was previously used as a gravel mine and is currently zoned as open space (O-S) with electric power facilities identified as a permitted use within the zone. The proximity to linear facilities was also a key factor in site selection. The proposed site has an existing 500-kV transmission line right-of-way located on the western side of the property allowing the project to directly connect to the electrical grid.  A major interstate natural gas pipeline is in close proximity. Therefore, the site was determined to be suitable for the project from engineering, environmental, and socioeconomic perspectives.

PSEG Fossil is committed to providing Maryland and the region with reliable and environmentally responsible energy. The PSEG Keys Energy Center will meet all applicable federal and state emissions regulations.

The new plant will be a highly efficient combined-cycle unit with a combustion turbine, heat recovery steam generator, and steam turbine – one of the cleanest technologies available for electric generation.

The unit will be equipped with state-of-the-art emissions control technology, including:

The PSEG Keys Energy Center LLC will represent a major investment in the local and regional economy.

Over the 40-year life of the project, it is anticipated that the PSEG Keys Energy Center LLC will bring significant new tax revenue – approximately $640 million in various taxes – to Charles County, the State of Maryland, Maryland-National Capital Park and Planning Commission, Prince George’s County and the Washington Suburban Transit Commission.

PSEG Keys Energy Center LLC and SNC-Lavalin is committed to partnering with Prince George’s County to bolster economic development and will accomplish this through strategic sourcing and bidding processes and by using best efforts to promote engagement and participation of LBEs and LMBEs throughout the construction of the Project.

Our Commitment To Diverse Suppliers And Local Workforce

Under a PILOT (Payment in Lieu of Taxes) Agreement with Prince George’s County, PSEG Keys Energy Center LLC prepared an LBE/LMBE Management Plan which was approved on June 11, 2015. The plan included the following economic and workforce inclusion goals: 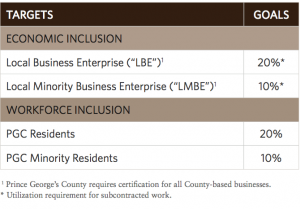 The project will generate about 700 jobs during the two-year construction phase. More than 20 permanent jobs will be created to run the new plant when it becomes operational.

Giving Back to the Community

In addition, as part of the Community Foundation Agreement, PSEG Power will donate $3 million toward the construction of a new Southern Area Aquatic and Recreation Complex (SAARC) in Brandywine, Maryland. The SAARC will include indoor aquatic space, a gymnasium, a fitness room and flexible programmable space. For more information, visit the Prince George’s County Department of Parks and Recreation website.

No new transmission lines will be required as part of the project. The PSEG Keys Energy Center will connect to the Potomac Electric Power Company (PEPCO)/PJM 500 kV transmission line adjacent to the property.

Fuel to run the plant is readily available. The PSEG Keys Energy Center will connect to a major interstate natural gas pipeline within close proximity of the site.

PSEG Fossil is a subsidiary of PSEG Power, an independent power producer that generates and sells electricity in the wholesale market, with a fleet totaling more than 11,600 MWs of electric generating capacity. With the addition of the PSEG Keys Energy Center, the combined-cycle gas turbine fleet would grow to represent in excess of 4,000 MWs, or approximately one third of the fleet. PSEG Power is a nationally recognized industry leader on environmental issues. PSEG Fossil operates the company’s portfolio of natural gas, coal and oil-fired electric generating units.

PSEG has always worked diligently to conduct our business in concert with the environment. PSEG has been an industry leader in tackling climate change and an outspoken supporter of creating a national framework for reducing power plant carbon emissions. Since 2007, we have used a three-pronged strategy of energy efficiency, renewable energy and clean central station power to reduce our carbon footprint. We’ve invested more than $3 billion in support of that strategy.